I was asked to look into different types of Typography and look into articles in which designers who have worked on branding or logos have discuissed this. I thought I would first investigate into a few typographers and then look for an artical on my main subject which is Paul Rand. 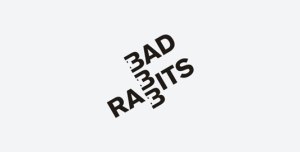 I really like this typography as the designer has used three rabbits within the logo design. I thought this really pulled the brand into the logo (Bad Rabbits, using rabbits within their logo) and also just simply made the logo look really unique. This isnt something I have personally seen done before and considering its so simple, I doubt I would have been able to think of doing something like this without researching into other creatives first.

I think this typography is really awesome in how they manage to put the ‘truce’ into itself again. I have seen a similar thing done with tattoos and its nice to see something like this done for a logo as it really does play with your mind. I thought I would look into this typographer, and to my delight I discovered some phrases within interviews which I felt really fit with my previous work on logos and idents. I discovered that during the process of creating idents and logos, the company would ‘rotate other designers in and out of the team to keep the ideas fresh. we use a process we call ‘distant crit’. creative teams or individuals in the sister office review work in progress and provide input.’ This is a great idea to keep new ideas flooding in but to also be reviewed on their ideas by people external to the project so that the critique is similar to that of someone outside the company observing it.

Researching into more typographers I discovered Dominique, and looking into her I discovered an interview in which she says the following;

After illustrating for 20 years, hand-drawing type comes naturally to her: “I don’t think I could ever be bothered scrolling through hundreds of typefaces on my computer anymore. It’s just easier for me to get out the sketch book. I also think typography is a passion that once you develop it, it becomes an obsession. I have that obsession now but when I was a student, I hated type. I just didn’t understand it, but something clicked along the way and now it’s all I want to use in my work.”

Just as a side note, This links in with me as a creative as we are asked to use the sketchbook as an alternative to digital sketches. I find that using my sketchbook helps me more then just rushing straight to digital forms of expression, and that when using my sketchbook I end up coming up with better prototypes in regards to creativity. I think if I was to develop my own typography, then I would begin in my sketchbook just as Dominique suggests.

“I get bored very easily, and I also think if there’s a concept behind what the piece is saying, the way it says it should also reinforce the concept. My thought process usually goes “what am I trying to say?” and then once I devise a quote or statement, I try and work out if anything in the statement suggests a medium or technique. So far thankfully, it has.” This applies to logos and idents as these should be inforced by the imagery and typography what the company is about or what they are wanting to put forward. This should be thought through fully and experimented with on a range of designs before settling for one. I have never really thought about coming up with a phrase before developing the design, and thinking about it now it could possibly help as it would possibly help me in thinking out of the box when developing logos or idents. Maybe even if just listing key words rather then a phrase? Its something to consider.

Trying new things each time however doesn’t come without risk of failure: “Oh yes, I’ve had many false starts, pieces that didn’t quite work, pieces that needed fixing and so on. Sometimes they’re so bad that I’m forced to change my concept mid-project. I read somewhere it’s called ‘confusion endurance’. You don’t always know what you’re doing but you need to cultivate the energy to just keep going anyway.” 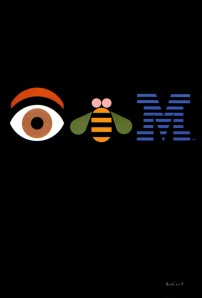 Paul Rand is an American Graphic Designer, born in August 15,1914. He was well known for his coporate logo designs such as :- “IBM”, “UPS”, “Enron”, “Westinghouse”, “ABC” and ”Steve Jobs NeXT” although his most famous was the IBM logo which currently still is the logo for this major company.

Bad design is frequently the consequence of mindless dabbling, and the difficulty is not confined merely to the design of logos. This lack of understanding pervades all visual design.

To me, this really says a lot as some of the bad designs I have noticed seem to be designed by people who don’t know their company, or their companies market. They seem to ‘dabble’ in something their don’t know much about which would affect the overall logo not achieving its purpose.

When a logo is designed is irrelevant; quality, not vintage nor vanity, is the determining factor.

I agree, I don’t think the age of the logo matters, but it’s the overall quality which defines a good logo and a bad logo. For example if a logo was made 50 years ago, and it was bad, seeing it now would still make it bad. The same applies for good logos hence why the IBM Logo has remained the same, it’s a good logo, despite its age.

If, in the business of communications, “image is king,” the essence of this image, the logo, is a jewel in its crown.

A logo should help a business’s image shine through, acting as a flag for the company, but not act as the company itself.

I agree with all of this statement, but the ending is what stands out most to me. Typography is its own art, thus it should be beautiful in its own right but what I find most annoying about some typography is that it is unreadable and hard to interpret. This leaves the typography ineffective as it does not serve its purpose for example…