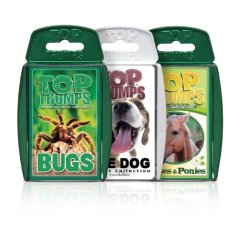 Top trumps is a card game in which players compete to win the game by comparing particular categories and the individual who has the higher value on that card is able to take that players card. Once a player loses his entire deck of cards, he is removed from the match and the player who is able to stay in the match the longest is the winner. This game has been around since the 1970’s and is still popular today with many different categories from animals to military, from space phenomena to music; this games market reaches to all individuals.

This game was taken on board pretty promptly after explaining to people within my group that I was previously aware of the rules so no rule card was needed although at quick glance the rules were simple and clear. This was bound to happen as the game is designed for a particular young target audience so the designers would have considered the layout and readability of the rules to make the game easy to understand. Once I had explained the game, we began quickly as the skill required was low yet the competitiveness between us as a team was rather high due to the atmosphere being set when playing the previous game of Jenga. The game itself became dull after a short time although the challenge was there, the only issue is the game relied too much on chance so there was no way to apply more challenge within the game to keep the player occupied and interested. So basically the game itself was so constant that it became boring after a set period of time. The only benefit of playing for long periods would be solely on bragging rights for me personally, although the game has the advantage of being simple to play and explain so it can get large groups of people playing fast. The game can be reinvented and applied in many different forms in which iv previously seen the game sell dr who and Disney versions of the same card game but due to the cards having a new skin they gain a new appeal to various audiences both who are familiar and unfamiliar with the game itself.

My personal reflection on this game is that I found the game rather simplistic to play, easy to get to grips with and explain to everyone and the game was fun to begin with but quickly became dull.  I think if there was a way to make the game more challenging, even if only for particular decks of the cards aimed at a particular group of individuals, for example adding something like question cards relating to that category of cards in which the player had to answer otherwise he would lose a particular number of cards. If this is unclear, here is an example;

‘Josh is currently winning at top trumps and currently he’s gained 3 cards in a row. He has to draw a ‘chance’ card in which a question is revealed to him. If Josh does not select the right answer he has to pass the three cards he has won to the individual on the left, if he gets the answer correctly he is able to take another players card at random. ‘

Although this only being an example, with this element like this added into the game or something similar, it creates variables to keep the game interesting and to keep player engagement constant.  It also gives more purpose to the games card designs as the user becames interested in the information written on the card as the information could become useful if the player gets given a question. The reason I suggest this is because usually the player only focuses on the statistics on the card and never on the education element to the game which is sometimes disregarded.

One thought on “Board games: #02 Top Trumps”