A patent gives protection over something you have created and allows you to take legal action if necessary if someone tries to copy your idea such as if an individual tries to sell, use or make your product. You need to apply for patent protection in order to qualify although you would be protected by things such as copyright if you don’t. You may need to decide if taking a patent is right for you because they can be very expensive and complicated enough that you may need to find outside help to obtain the correct one. In order to obtain a patent you must go through the IPO (Intellectual property office) and file an application and you should hear a response within 6 months in which you would respond and your patent would become published 18 months after you file it. In some instances such as gaming, you could make money from a patent for things such as a controller design if you have something unique, in which if someone wishes to use the design they would have to pay you royalties. Patents can protect game play method and UI communications and even ways in which the content would be distributed e.g. a particular disc. Patent protection even covers new designs such as UI artwork or character designs. A patent can protect a game engine, a method or process which is performed by a game and a games concept, Board games can also be covered by patent protection.

An example of a patent could be Crazy Taxi’s patent for “Game display method, moving direction indicating method, game apparatus and drive simulating apparatus” which was patented in 2001. Also in 2001 Fox and EA decided to release The Simpsons: Road Rage which had a very similar formula to Crazy Taxi. Sega decided to take action against this and it was settled in private for an unknown amount. This patent is still valid and is considered one of the most important patents to date. 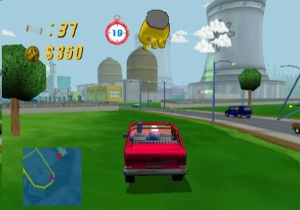